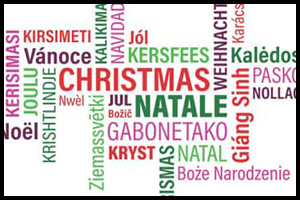 Whether you say Merry Christmas, Feliz Navidad, Joyeux Noel, Happy Hanukah or some other version of the holiday greeting, they all bring a similar festive vibe to the conversation. Christmas language has a long and intricate history.

In fact, almost every language has its own version of “Merry Christmas.” But have you ever stopped to think of why we say the phrase at all and the history behind it?

As the holiday season is upon us, it’s a joyous time to reflect on the origins of the holiday but many people don’t know the history behind the language.

The History of the Word Christmas

First, let’s explore the history of the word Christmas, which comes from Middle English Cristemasse, meaning Christ’s mass. Yes, the terminology has deep-rooted history in Christianity.

According to brittanica.com, the English term Christmas (“mass on Christ’s day”) is of fairly recent origin. The earlier term Yule may have derived from the Germanic jōl or the Anglo-Saxon geōl, which referred to the feast of the winter solstice.

The word “Christenmas” was also historically used, but is now considered archaic and dialectal, according to Wikipedia, which explores the etymology of the word.

Language has now evolved to the point where many people have replaced Christmas with “Xmas”, though they likely don’t know where that originated or why.

Xmas is considered an abbreviated of Christmas, based on the initial letter of X, which is Chi/X in Greek language. Now, people often use the term as slang for Christmas. While this word is pronounced the same as “Christmas”, many people incorrectly say pronounce it as “ex-mass.”

Of course, the holiday season is also the time of year that many people celebrate Hanukkah, which is an eight-day Jewish celebration that commemorates the rededication during the second century B.C. of the Second Temple in Jerusalem, according to history.com, which explores the history in depth.

Often referred to as the Festival of Lights, the holiday is celebrated with the lighting of the menorah, traditional foods, games and gifts from Dec. 22 to Dec. 30 this year. The word Hanukkah means rededication in Hebrew.

In case you’re wondering, there are thousands of ways to express Merry Christmas in other languages, and you can find them here or here.  Memorize a few and surprise your friends!

Whatever language you choose to express Merry Christmas in, enjoy your holidays and a Happy New Year!

Read Our Previous Blog Post: Top Reasons to Consider Using Video Conferencing or A Webinar for Your Next Meeting