A Case for French 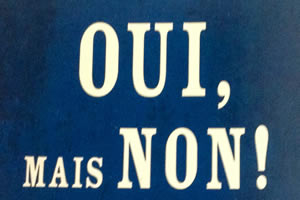 A case for the French language

In a global economy, communication in several languages is a key differentiation between the success of a business or its failure.

Being able to communicate in more than one language is also an asset to anyone looking for a job. When I attended school in Portugal, we were introduced to a second language at grade five and then a third language at grade nine if you were studying humanities. But two languages were mandatory. Perhaps this is the reason that regardless of where you travel in Europe, usually someone understands either English or French.

On my drive to work today, as I listened to John Moore in the morning, on 1010AM radio, it was mentioned that one of our education boards in the GTA is cancelling their French language program because they can’t find resources to teach it. And the question was posed if French was as necessary in a global economy as for example Portuguese, Spanish or Mandarin?

Perhaps for us in Canada, predominately only in the province of Québec is where bilingualism is of most importance and certainly in other provinces such as Ontario, New Brunswick and Manitoba to a lesser degree, but as a country, we all benefit from knowing more French. And not only to be able to feel more at home in our French-speaking provinces, and in certain other regions of other provinces, but also to communicate with all our fellow Canadians as well.

The importance of Portuguese, Spanish and Mandarin are a discussion for another day.

John McWhorter, a linguist, wrote on his blog that he believed learning French by Americans was outdated because French immigration to the US was limited and therefore Americans should learn languages such as Mandarin, Spanish, Arabic or Hindi. But in March of 2014, Forbes magazine, published a study by Natixis bank, which concluded that the French language could be by ‘2050 the most spoken language in the world, because of its fast spread in some areas where the population is increasing rapidly, especially south of the Sahara.’

2050 is less than 33 years away. It will be about the prime time when our school children will be in the middle of their careers and running our governments, business and therefore the economy. If we are to continue to be an important part of the global economy, I think there is a strong case to keep teaching French, and for our children to learn it!