Michigan was named after Lake Michigan, whose name is a French adaptation of the Ojibwe term mishigama, meaning "large lake". As of the July 1, 2008 Michigan has an estimated population of 10,003,000. It has the longest freshwater shoreline in the world, bounded by four of the five Great Lakes, plus Lake Saint Clair and ranks 2nd in the nation for coastline of any state, behind Alaska. Michigan has 65,000 inland lakes and is home to more public golf courses than any other state. Michigan is the only state to consist entirely of two peninsulas. Michigan has a humid continental climate, although there are two distinct regions. The southern and central parts of the Lower Peninsula have a warmer climate. The northern part of Lower Peninsula and the entire Upper Peninsula has a more severe, colder climate.

The Michigan economy leads in information technology, life sciences, and advanced manufacturing. Michigan is commonly known for its auto industry. Michigan ranks fourth nationally in high-tech employment with 568,000 high-tech workers, including 70,000 in the automotive industry. Michigan typically ranks third or fourth in overall research and development expenditures in the United States. Michigan also ranks 3rd in the nation in licensed Hunters at over 750,000. Michigan is the third leading grower of Christmas trees with 60,000 acres of land dedicated to Christmas tree farming. A wide variety of commodity crops, fruits, and vegetables are grown in Michigan, making it second only to California among U.S. states in the diversity of its agriculture. Michigan is a leading grower of fruit, including blueberries, cherries, apples, grapes, and peaches. These fruits are mainly grown in West Michigan. Michigan produces wines and a multitude of food products.

Language Marketplace has been providing professional Interpretation and Translation services in Michigan to a wide range of clients for many years.

We have English | Spanish | French language coordinator and conference interpreter services. Below is a list of towns and cities in Michigan that Language Marketplace presently has customers: 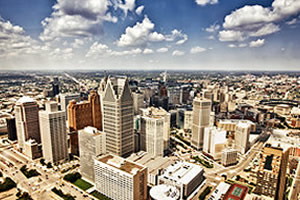 Michigan is the Cereal Bowl of America; in Battle Creek they produce the most cereal in the U.S.!